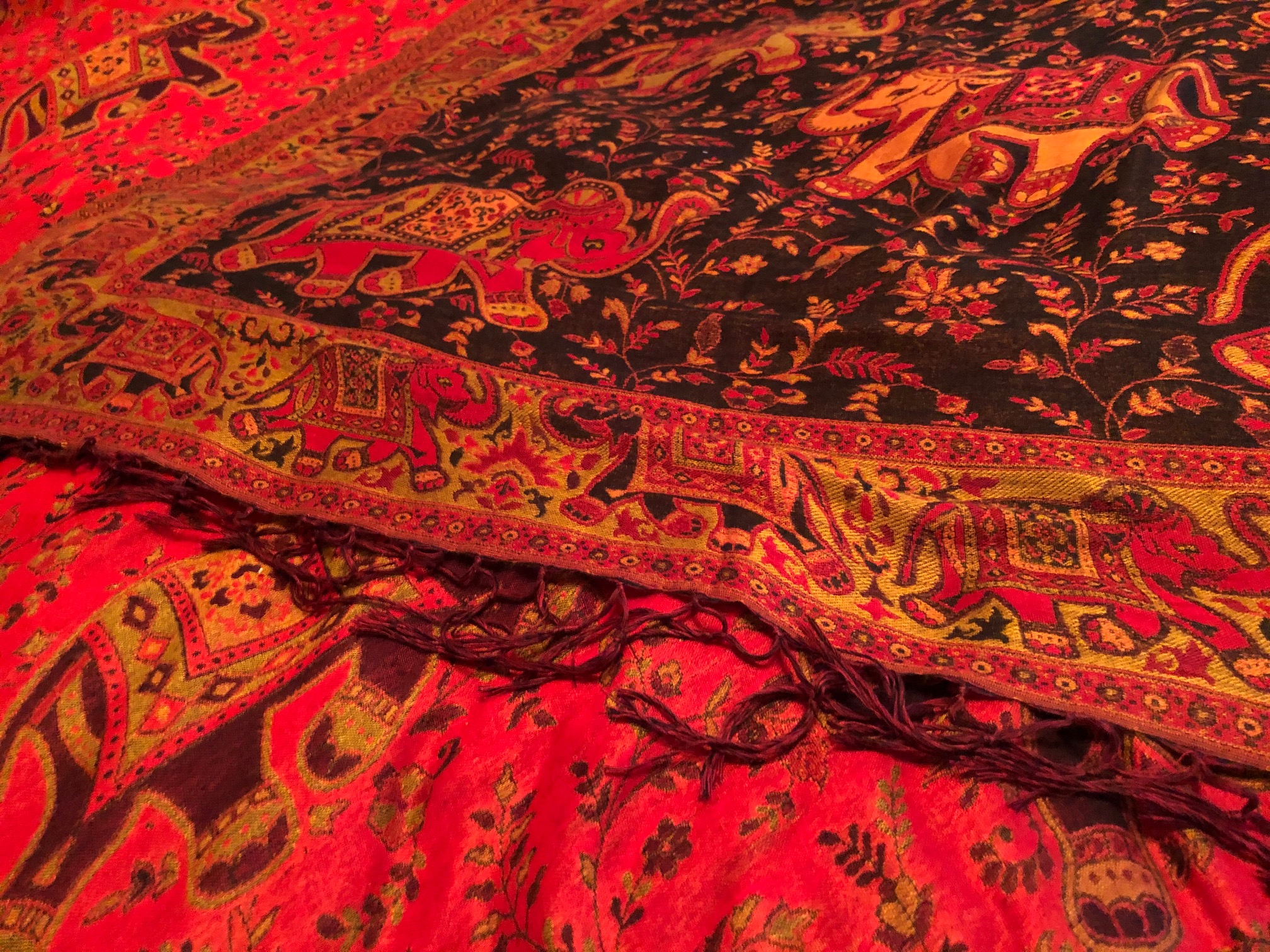 Unravelling memories of a year gone by …

This time last year, just back from my first ever trip to India with Hadyn and two of our oldest friends, Richard and Jay, I sat down to write our Christmas cards. I was full of first emotions, stories and images, wanting to share the experience. But somehow, I was incapable of putting anything into words. My head was scrambled, a confusion, and I couldn’t commit anything to paper.

Instead, over the Christmas break, I read EM Forster’s painfully touching ‘A Passage to India’, a novel where he portrayed India as a place like no other, one that thrilled some and baffled others. He called it a “muddle” which is such an old-fashioned word, but so accurate! I learned that after his first visit, although Forster was transfixed, it took him 20 years to produce his novel.  OK, I thought, I could take my time! And time is something we’ve all had quite a lot of this year, so in the absence of any new adventures, I decided to dive back into some of my favourite moments of this wonderful trip.

Everyone told me that my first trip to India was going to be an assault on my senses. The sights, the smells, the crowds, they were like nothing else on earth. So, I was told.

But being told doesn’t mean I was prepared for how I felt. Seeing, smelling, feeling this extraordinary place myself, was deeply moving. At first, I suppose every smallest thing was unfamiliar and I was excited. But it soon became overwhelming.

In those first few days, I developed a more uncomfortable realisation that I was really totally ignorant. I was just as naïve as every other first-time tourist. My knowledge of the language was limited to reading a menu. Our first lunch in Delhi – from a canteen type outlet for local offices – was sublime: a local Thali, a tray of small dishes of channa chole, dal, chopped onions, parathas and roti. The whole meal was deliciously spicy with just a hint of chilli and was the first of many, mouth-watering flavours that have been ridiculously hard to imitate back at home.

But that was where the familiarity ended. What I knew about India was, in fact, nothing, and I was completely unprepared for its complexity. Throughout the trip, I tried to learn and understand more, but after a year at home, I have been left with this feeling – feeling what? Not exactly assault, not shock, but an overwhelming sense of bewilderment at the confusion, the chaos. As EM Forster put it 100 years ago, India left me in a muddle. And there is so much more to investigate.

We started our Classic Rajasthan tour in Delhi, which is probably a tactic to make everywhere else you visit afterwards seem more manageable. Before COVID-19, the only place I’ve ever worn a mask is Delhi as it was enveloped in a toxic smog that obscured some of the city’s most iconic monuments.

We had been told to wear masks to protect ourselves from the pollution but I remember feeling they would also serve to obscure our expressions at the jaw-dropping sights that confronted us – the congestion, vehicles, people, animals, the exposed power cables, exposed drains, the exposed raw and sprawling urban poverty. Again, everything we had been told, but was until then far, far beyond my own experience.

The chaos of India is epitomised in Old Delhi. In the shadow of the gigantic mosque, Jama Masjid, is the labyrinthine Spice Market, where street vendors sell every spice you’ve ever heard of, by the sack or the teaspoon, depending on whether you are a trader or tourist. Millions of people are living and working here in unspeakable conditions. The smells are intense – not only of the produce but also the diesel, mixed with the stink of human and animal waste. 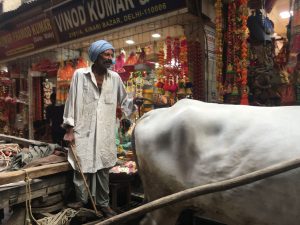 A thousand alleyways are the city’s trading routes. They are narrower than any single lane, but that doesn’t stop tuk-tuks and motorbikes and even cars passing through. It’s hard to know who has right of way, until you are confronted with an ox-drawn cart laden with sacks of rice and spice, driven by one of the traders, beating off everything and everyone, including the thieving monkeys, the cows, the tour guides and the tourists.

We were literally thrown into the stalls whenever the carts need to pass, clutching our masks and phones, and somehow trying to record a moment that was – for us – unique. And yet – for people of Old Delhi – the reality of their every day. Old Delhi was a baptism of fire. Hot, crowded, impoverished, unfamiliar. Beyond imaginable. Such a shock to the senses, and a punishing place.

From Agra to Fort Madhogarh

(Skipping over our first India train experience from Delhi to Agra, the irrefutable, iconic beauty of the Taj Mahal and yet more gut-wrenching poverty in its shadow…)

Arriving at the imposing Fort Madhogarh in Tehsil Bassi, Rajasthan, we could sense the presence of royalty.  Sitting about 200km from Agra and close to the Ranthambore national park, the 400-year-old fort was granted to Maharaja Madho Singh of Jaipur in recognition of his brave support of the then emperor of Delhi, Ahmad Shah. It has since been passed through several generations of arranged marriages and Maharajas including Saiwa Ram Singh in the 1860s. Through smart negotiations with the local rulers of the British Raj, he managed to keep it in the same family ever since. 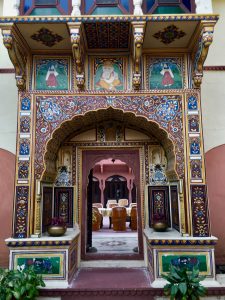 The Madhogarh Fort is in the process of transforming itself into a boutique heritage hotel and is a little haven of serenity. We were greeted by tall, handsome and impossibly elegant hotel staff with marigold garlands and a refreshing watermelon juice, and immediately captivated by its hint of grandeur. There are 12 bedrooms in the property – each one unique in shape and size and furnished with traditional Rajasthan fabrics and wall hangings. Each one also blessed with its own unique plumbing.

Hadyn and I were given the Maharaja Suite overlooking the central courtyard which had a king-size bed, bathroom and a receiving and sitting area. Across the terrace was a simple double room, where the mattress sat in an expansive windowsill, overlooking the village of Bassi below. The tour group we travelled with – just 9 people from England, Switzerland, New Zealand and Canada – had already bonded, so we skipped from room to room checking out the views from the different windows, the art on the walls, imagining we were royal visitors from years gone by. 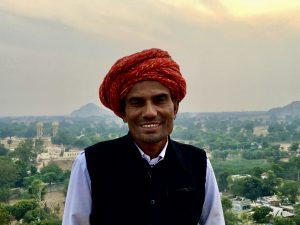 We were delighted to find our suite of rooms included a functioning shower and toilet, and we arrived for pre-dinner drinks suitably refreshed. We had Indian gin and tonic on the ramparts overlooking the village (also owned by the Maharaja), followed by dinner in the courtyard. We ate the most delicious dahl and channa curries and eventually sloped off to our various suites to sleep.

Predictably enough we woke up a few hours later to find that our bathroom was flooded and we had used up most of the water for what seemed like the entire estate. Pipes, it seems don’t quite work the same way in Madhogarh, so we had to mop everything up with towels, jam the taps shut and wait until morning for the Maharaja’s plumbers to take charge.

At breakfast we were entertained by the owner of the property who told us stories of previous visitors of note. In fine Rajasthan tradition, family portraits donned the walls of the public areas and our host pointed out a photo of Princess Diana who was one of the first members of the British royal family to visit the property in the 1980s. I’m not sure whether she had the Maharaja Suite but I bet she didn’t have the same problems with the plumbing.

Hadyn and I rarely buy souvenirs, but some things are unavoidable in India, especially in Jaipur. We arrived there fresh from Madhogarh and only a week into the trip, it already felt like we’d been away forever. After days of intensely cramming the history of Rajasthan and its ridiculously massive forts, we were looking forward to a free day where we would explore independently. Released from our over-zealous and rather controlling tour guide, we would be able to soak up the atmosphere, go with the flow and choose spontaneously where to visit, when and where to browse.

Of course, nothing was further from the truth. The tuk-tuk drivers we thought we had found had in fact been specially selected and they had an agenda! For a few hours, they were brilliant at giving us the impression that they were taking us where we wanted, but after our best lunch ever at an authentic locals-only lunch spot, they then threw in the compulsory stop at their cousins’ textiles warehouse where we were swept up in an overwhelming Indian welcome, vats of chai and thousands of rolls of irresistible fabric. Eventually I or Jay cracked, one of us said we liked something, then there was Mark’s birthday to think about and, did Jay mention a wedding present to buy? An hour later, we had chosen bedspreads and quilt covers and – for some reason – Richard had a cashmere scarf forced on him, and then someone else said since we were having it all couriered home, surely we had to choose another one for ourselves as well?

And I am so very glad we did. Because I have looked at this bedspread every day of this peculiar year, and I am drawn back to that day in Jaipur. To the colour and the beauty of the fabrics, the bewilderment and laughter of negotiating with taxi drivers and food sellers and traders, the so many extraordinary sights and sounds we shared with lifelong friends. I look back at all this and can capture the foreignness of it all, which is, in the end, what really excited me. The novelty and the challenge of feeling something entirely different from the predictability and the norm that is England and Farnham and the safety that is (well, that used to be) home. 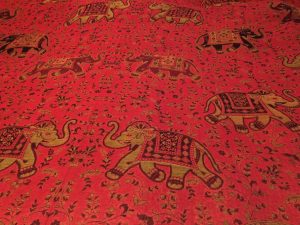 So many memories are wrapped up in this fabric. It is a blend of silk and cotton, soft to touch, as light as a feather but if you lie underneath it, it is warming like a blanket. It has a repeat pattern of a hundred vivid red elephants, each one with a painted trunk and toes as if ready for a royal procession and wearing an intricately woven blanket of its own. It is also reversible, with a background of red one side and black on the other, so with every throw, I can set the mood to be light or dark, day or night, joyful or serious. It’s more than a splash of colour against our Elephant Breath bedroom, so much more, and I love, love, love it.

When I take a really close look at this bedspread, I can spot some imperfections, where the elephants don’t quite have the same patterns on their toes, or their reversible blankets are a bit worn. There are a few threads that, like my memories, have started to unravel. But a year on, taking a step back, I have found a fresh perspective and the images are beautifully sharp again.

I am deeply grateful that Hadyn and I had this Indian trip last year and I will cherish the memories forever. But this year, particularly, when we have all had to reframe our hopes and plans, and stayed home far more than any of us wanted, this beautiful bedspread makes me appreciate what we have done, what we have seen, simply what we have. With all its symbolism and its imperfections, it takes me back to the vibrancy, the scale, the laughter, the tears, the exotic muddle that will always be India.

Happy Christmas everyone, and here’s to a more adventurous 2021 for all of us.